Written and photographed by Brandon Hanks

It was a long trip to Louisville, Kentucky on this past weekend, but it would soon be a trip that would go down as the hottest and most thrilling event of the year so far! I couldn’t help but become giddy with excitement as I arrived to the intimidating structure that is Fourth Street Live! The heat would be the first to greet everyone as it was a smoldering 102 degrees outside for this event; there would soon be a different type of heat hours later when Bush would take the stage. 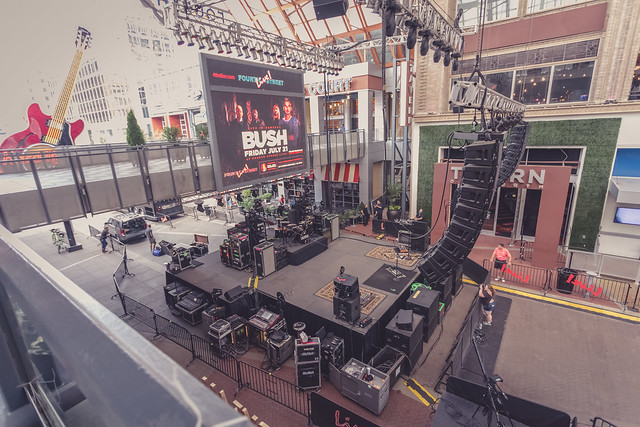 One by one fans started to funnel in, look at the stage, and wander around the venue, hoping they might get their first glimpses of Gavin Rossdale himself before the show would commence. An hour or two after arriving, the man himself, Gavin Rossdale stepped off his bus and was almost immediately greeted by a few adoring fans who couldn’t contain their excitement. He gave fans a warm smile and thanked them for showing up. He even took a few selfies with his fans before going on to walk around himself and stretch his legs.

I took to the crowd at Fourth Street Live! to ask fans how long they had been listening to Bush, and what songs they wanted to hear from the legendary band, and the responses were almost all the same. Songs such as “Machinehead,” “Glycerine,” “Everything Zen,” and “The Sound of Winter” would be the most anticipated ones from this Louisville crowd. Some had been fans since the mid 90’s and some had never even seen the British rockers live at all. This was gearing up to be a show none of us, me included, would ever forget. 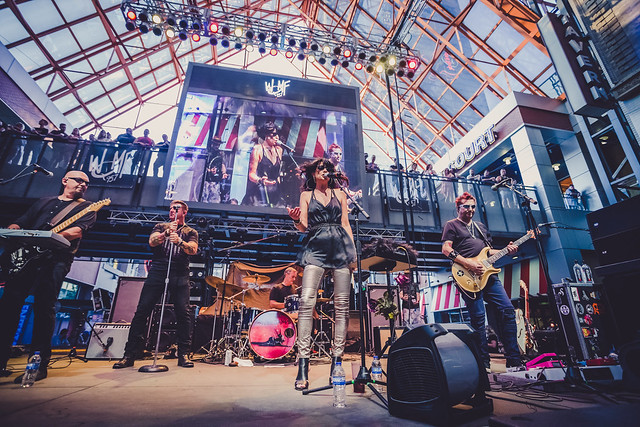 The entire street was first welcomed by local band Velvet Saints from Louisville. The band was a strong and well put together group. Mid-performance, I caught up with a member of their team Jake, who had told me the guitarist to the right of the stage was none other than Kevin McCreery, who has also played for Uncle Kracker. The band was full of energy and excitement to play this show for their hometown of Louisville. With a sound that could be considered a darker version of Depeche Mode, this talented five piece band most definitely got the crowd ready for Bush. 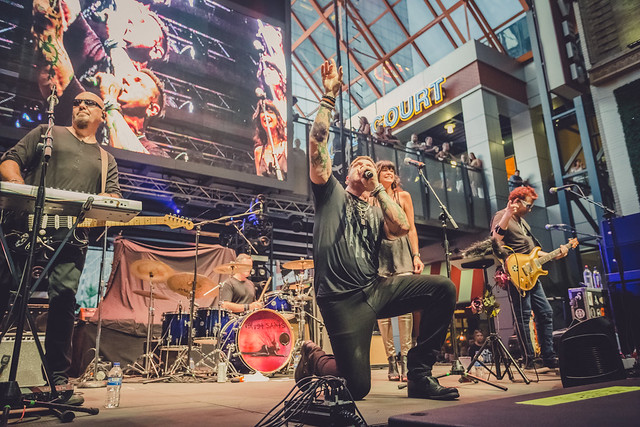 As Velvet Saints crew burned all the equipment off stage to make way for Bush, I got in some more time with the fans and asked them if they were ready for their favorite band to take the stage and rock the entire street, which is a whopping 350,000 square feet! There was even a mom and daughter there who have been fans since 1997 and they asked, “Will you be in front of us the whole show”? I easily replied to them that I, in fact, would not. I assured them that after three songs, I would be nowhere in sight. 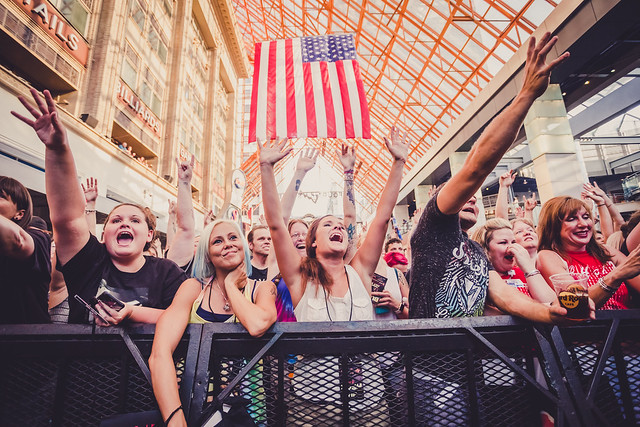 They would even, mid-shot, ask me if I got a good shot! I got started in music photography as a fan first, so knowing well that you don’t want someone standing in front of you while you rock out to your favorite group or band is something I always keep in mind. The mother and daughter duo was thrilled and relieved they would get the best possible view and rightfully so, as they had been there all day! Another fan, Amanda, traveled all the way from Ohio and has seen the band 15 times since 2000. She’s “kind of a big fan” according to Amanda. It’s only been two months in between seeing them the last time! 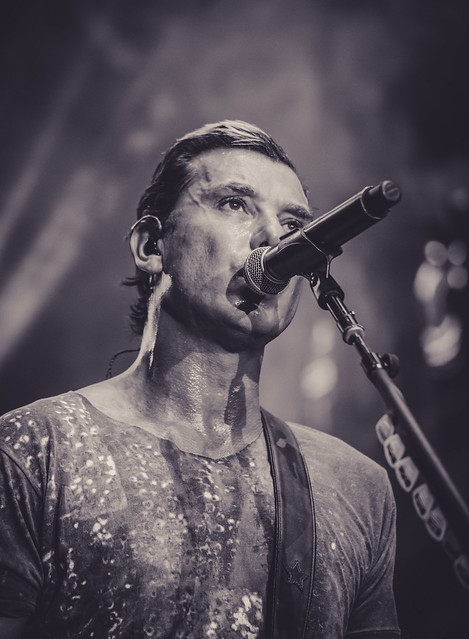 The night had completely fallen upon Fourth Street Live! as the stage lights went dark, the smoke machines cranked out a cloud on each side of the stage, and the band made their way to greet the crowd that has been waiting under the hot sun. First out was Corey Britz, followed by Gavin, then Robin Goodridge and Chris Traynor came out and up stage left. It was officially time to rock as Bush cranked out the words: “There must be something we can eat, maybe find another lover, should I fly to Los Angeles, find my asshole brother.” Gavin was primed and very energetic as he leapt up in the air before the chorus in “Everything Zen.” 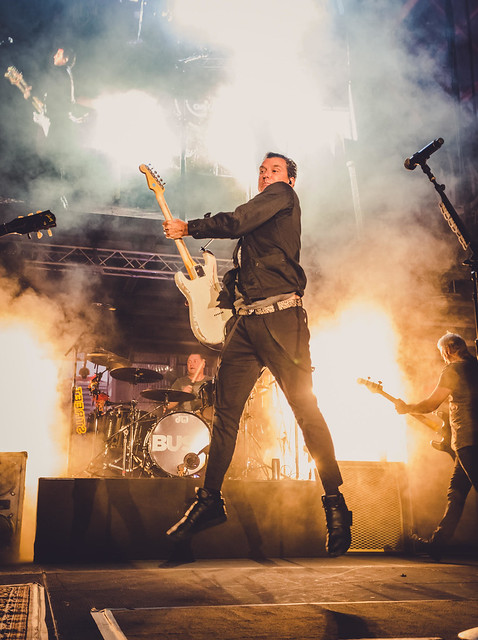 The song finished, and the crowd was eating it all up, more than ready for the next song. It’s as if each song could play forever and no one would seem to mind! Frontman Gavin Rossdale was extremely involved with the fans; he would step down into the pit to shred a time or two, right there for fans to get all sweaty, throw up their horns, and show the band they were pumped for each chord they would play. 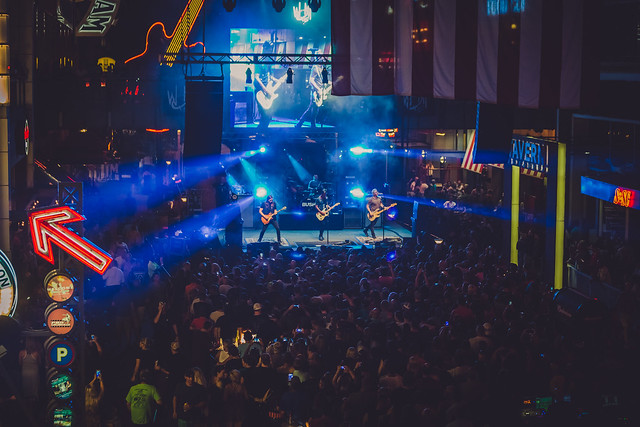 This was a very exciting time for fans that had come out for the band, because this was Bush’s first time playing the outdoor venue. From the way it would later come to an end, it wouldn’t be their last visit either! Gavin took some time to talk to the crowd, and thanked them all for coming out. Then, without hesitation, would strike back with “The Chemicals Between Us,” a crowd favorite and one of mine as well! The chemicals between us were very much combustible, and all of Fourth Street exploded with excitement and nostalgia as the song ended. Fans screamed for more songs, and more songs would be exactly what they would get with a set list that impressed even me twenty-songs in all, and the band ended the night on a high note. 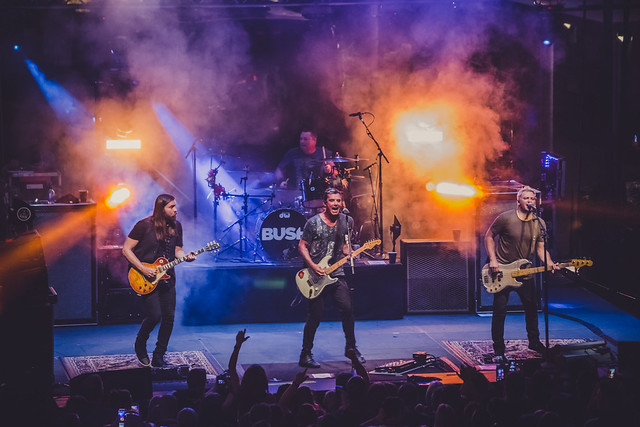 “Comedown” would be the band’s final statement and farewell. The screams and smiling faces would follow everyone as they proceeded to exit the venue and drive home with new memories of a night that left everyone hot and bothered in their own ways. For this fan and photographer, it was a honor to see Bush live and in person, and even catch a smile from frontman Gavin Rossdale and a devil horn from Corey Britz!

Full gallery of the night can be seen here.

Be sure to check out Bush on tour in support of their current album Black And White Rainbows, US Tour Dates below:

The Chemicals Between Us

The Sound of Winter

The Only Way Out

The People That We Love

The Beat of Your Heart

The One I Love

2 thoughts on “ BUSH Packs The Streets Of Fourth Street Live!”