It’s summer in New York City and the Lower East Side of Manhattan is full of revelers of all types. Law students from an NYU bar crawl in droves from the West Village to the Bowery. Tonight Of Clocks and Clouds are playing the Bowery Electric, an upscale music venue that has a good sound system where more serious artists entertain the folks at the bar. Of Clocks and Clouds is a little bit different; they consider themselves a psychedelic band. However, their brand of psyche is updated for today’s audiences. The Clocks are heavy like a metal pocket watch and ambient like a cloud.  To hear them you might think they were a European band because they draw a lot from experimental space jams that hark back to early Pink Floyd and the beginnings of the integration of synthesizers with ominous guitar constructions. 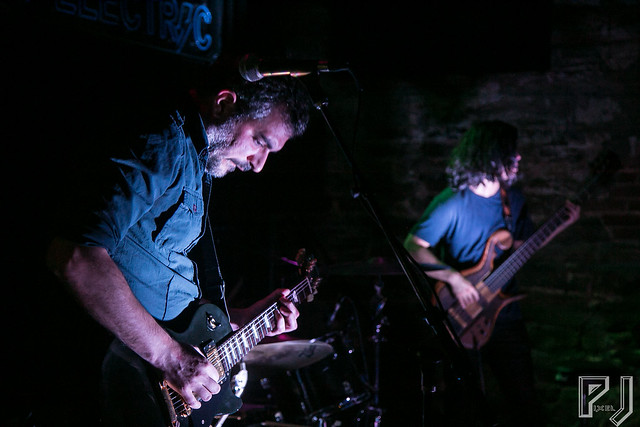 OCAC is a hybrid of dark muzak with a touch of goth. Head music, the kind of music you don’t dance to but you put on your headphones and enjoy subtle nuances. I would even consider them art rock to some degree. They are into texture, moodiness, and sonic guitar work that fills the room. They use an array of interesting pedals and have a haunting quality that to me bring to mind disembodied voices and things that go bump in the night.

I described in my previous article “This Ain’t No Mudd Club,” this past December for Shutter16.com, how I was introduced to this group. I first saw Of Clocks and Clouds at Freddy’s Bar in Brooklyn around the summer of 2014 by chance, having nothing better to do on a Saturday night and was left with a lasting impression. About two years later I got to see them again in Bushwick at an alternative space at an event put on by the Brooklyn Creator’s Collective (two of the founding members of OCAC are from Brooklyn). I managed to get a complementary copy of their 2014’s release You and when I took it home I thoroughly enjoyed it. Back in December I ranked their 2016 CD Better Off as one of my top ten new releases of the year from the New York region. 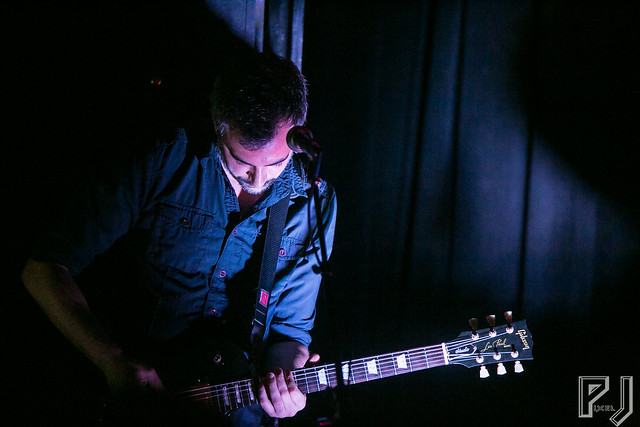 The Bowery Electric was a fun show. The band is developing a light show to go with their live performances and use a surrealist stage setting that enhances their otherworldly assault on the sensory organs. They opened with “What You Need,” which has a great electronic sound. It brings to mind some of the great stuff Depeche Mode is known for but a lot darker. OCAC have a dreary sound. Their overall mood and sentiment is a lot like Type O Negative, another band from Brooklyn. “What You Need” is a cool laid back jam that set the pace for the rest of the night. OCAC start off mellow, and crescendo and decrescendo during the course of their shows and subtly build up to a climax. 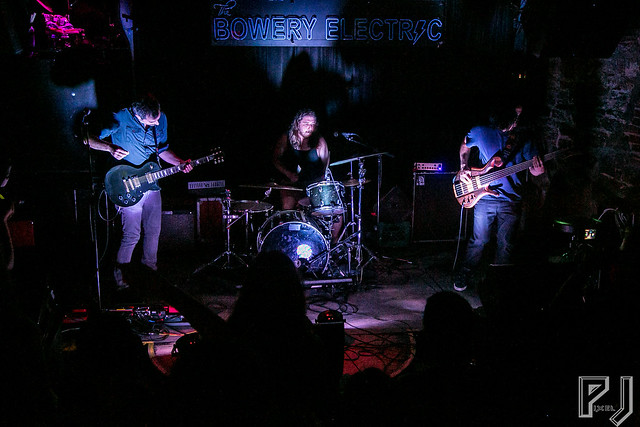 The instrumental “Open Heart Failure” from Better Off gripped the audience with its sonic mountains and valleys. OCAC has musical dynamics. Vocalist/Guitarist Joe Salgo and drummer Ross Procaccio have been together about 6 years and just recently added bassists Max Devlin, making them an official trio. Devlin’s bass work really gives a nice flow to some already great pieces of music. He was the missing piece of the puzzle.

Salgo explained that the band live is a different experience than on record; the band feels more connected to the music when they play live. “The sound is much more visceral live. We express more feeling and emotion. The sound fills the room,”  explained Salgo. Indeed it does, hearing OCAC live makes you feel like a piece of driftwood on a wave during high tide, they immerse you in sound. 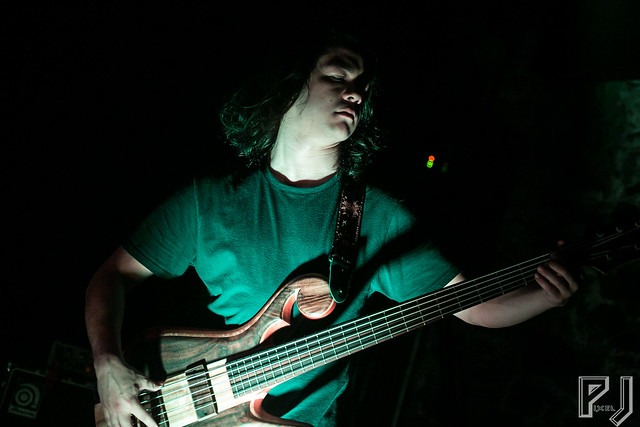 As I said they have a nice flow. They have interesting transitions in their music the way a classical opus has contrasting movements. The drummer Ross Procaccio has had some experience in transitions: when he was in high school he arranged a medley of tunes from Dave Brubeck’s classic 1959 jazz album Take 5. Not an easy undertaking because every track on the album is in an odd meter: 5/4, 7/4 and other quirky time signatures. Procaccio loves Jazz and is a big Art Blakey fan. He also mentioned some other bands that I would give a listen too.

Q: “What other music do you listen to?”

They listen to a lot of different stuff and Salgo mentioned how he always goes to see the jam band Umphrey’s McGee.

The finale of the show took me off guard. They covered Black Sabbath’s “War Pigs!” It was awesome! It wasn’t a carbon copy paint by numbers version of the classic but a morphed OCAC version. They melded their signature vocabulary into the cover giving you what you would expect alongside what you wouldn’t expect. They took something old and and made it something new.

OCAC are playing two more shows in NYC this summer: American Beauty on August 2nd and DROM on September 14th. If you are in the Big Apple at that time come down and melt some faces with the Clouds.