It always nice when a record company reaches out and asks you if you would like to cover one of their artists as they come through town; this very instance happened when the nice folks at Bloodshot Records asked if we could go out to see The Banditos on the 4th of July at the US National Whitewater Center in Charlotte, NC. It was a no brainer to say YES. I had seen the band last year when they played the same venue on Memorial Day Weekend, and were one of my favorite bands that I saw in 2016, at one of my favorite venues. Needless to say, I jumped at the chance to go out and see them again.

What else is more American than family, the outdoors, sports and games, beer, and music? That is Americana to me. If you want a place to celebrate the 4th of July with your friends and family in Charlotte, the US National Whitewater Center is the place to be. If you haven’t had a chance to visit the USNWC, you certainly need to go check it out. One minute you can be boating with the world’s finest Olympic paddling athletes, floating on air on one of the many ziplines, taking some sweet twisties through the woods on your 29er, testing your upper body strength on one of the many climbing walls, and the next thing you know you are bouncing down front of the stage listening to some of the best musicians as they make a stop at the intimate outdoor venue. 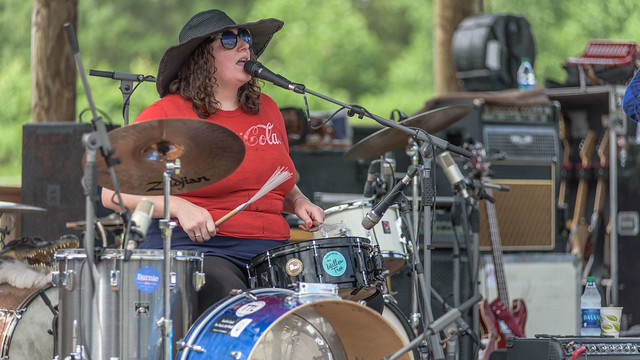 The USNWC does an amazing job of bringing in musicians for their festivals. The 4th of July this year was no different. There aren’t many places where you can go out to a festival and the only charge to get in is a $5 per car parking fee? I love the Whitewater Center! The festival lineup for the Independence Day Celebration was a Southern Rock/Americana showcase. On tap was Megan Jean and the Klay Family Band, The Banditos, and headlining the evening was Lucero.

The Klay Family Band is comprised of the married duo of Megan Jean and Byrne Klay. They have a simple setup for their show, Megan Jean on drums and vocals and Byrne on electric banjo, though their show was far from simple. The classically trained vocalist has a beautifully rich range and tone while maintaining a slick beat. Her vocals were perfectly accompanied by Klay on his banjo. I had a chance to speak to their management team after their performance, and he let me know that the two are road warriors and are constantly on the road, playing over 200 shows a year. I would highly recommend checking out the duo when they come through your town. If you like strong songwriting, grooving beats, and excellent vocals, you will love Megan Jean and the KFB. 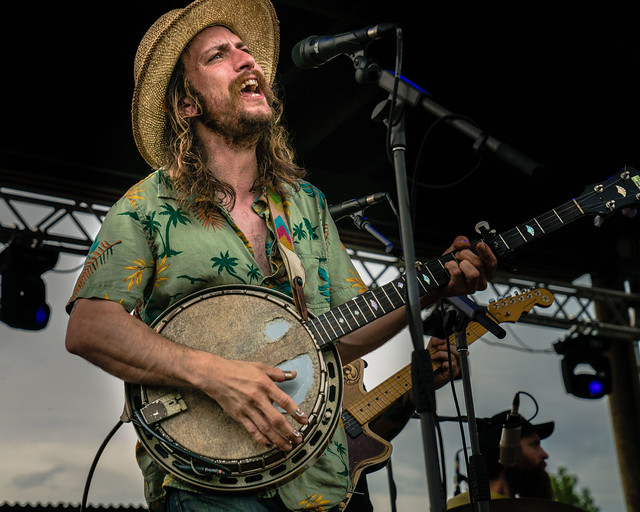 As is the norm for me, if I am attending a show and their is any chance of rain, it is going to rain. It rained, of course, between the changeover from MJ&KFB to the Banditos. This sent the folks who were lounging in the lawn area scrambling. It was probably more of the lightning in the distance than the rain, but this didn’t stop the Banditos from firing up their set anyway. I had a chance to listen to their latest record, Visionland, over the weekend before the show, and found myself really interested to see how the songs off the new record would sound live. Since I had seen them a year before, I knew they had a straightforward high energy rock sound that would get you off your feet, but this record seemed to offer a more diverse sound than I remembered. The new record is bookended by two up tempo rock offerings with “Fine Fine Day” and “DDT.” They kicked off the show with “Fine Fine Day,” and I will say it kicked ass. The rest of the record has more of a medium tempo feel interlaced with some psychedelic groovy instrumental breaks to keep it interesting. 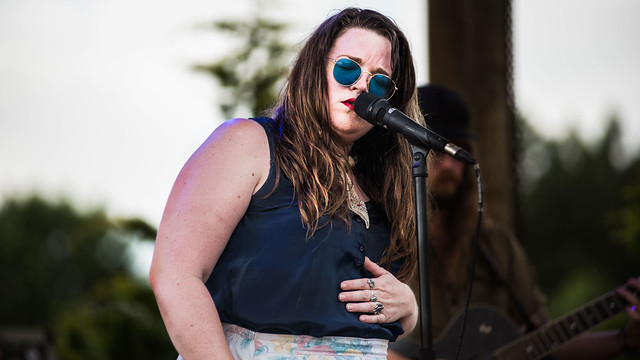 The title track “Visionland” is a song that takes you back into the late 60s-early 70s with its fuzz guitar sound, then goes full tilt when Mary Beth lays into her powerful vocals and the boys crank it up to the next level. One thing is for certain, Mary Beth Richardson has a voice that can go from soft to rock star legend status. She showcases her skill that most can only dream of on the deep, bluesy “Healin Slow” and “Still and Quiet.” Hearing these live did not disappoint.

The raw, effortless talent just flows as she closes her eyes and becomes one with the song. With Stephen Pierce on banjo, and Stephen Salter on Telecaster on one side while Danny Vines’ bass and Corey Parsons’ guitar occupies on the other, the beat is held down dead center with Randy Wade’s hard driving drums. “Fun All Night” takes into a fun finger snapping, head bobbin, body rocking diddy that the boys step in and take over vocals, and show that they have some chops too. It even includes a kazoo solo and a some slick guitar riffing. 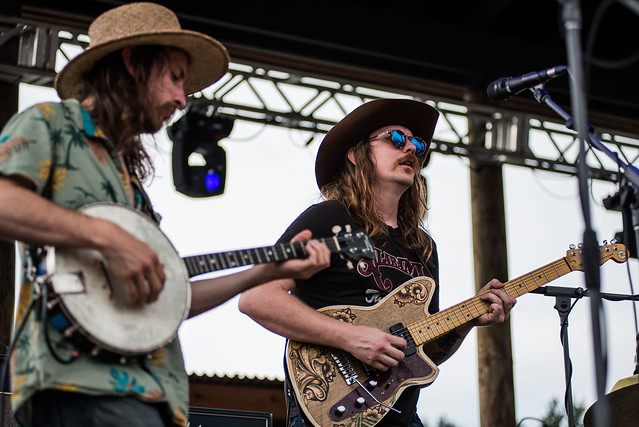 The Banditos played through the rain, and as the sun came back out, so did the people from the safe confines of the beer garden. As the Banditos finished up their set, they all worked together to clear the stage to get ready for Lucero. They were all business as they offloaded their gear into their van. I was hoping to get a few words with them after the show, but unfortunately, I wasn’t able to catch them. I did enjoy listening to Visionland, and I think it has some moments of genuine goodness. It is obvious that the the members of the group have many different influences to them, and it comes through on the record.

I think to truly appreciate the talents that the band offers, you have to go see them live. There are a few bands out there that I don’t think you can really capture them in a recording. Something about the raw, live emotion just can’t be captured the same way as when you are there, live in the flesh, and can groove with them and they give it all they got. I think the Banditos fall into that category as well. 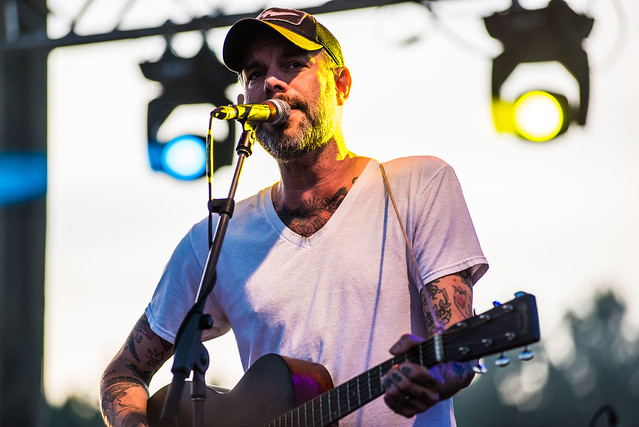 I think to truly appreciate the talents that the band offers, you have to go see them live. There are a few bands out there that I don’t think you can really capture their essence in a recording. It’s like trying to put lightnin’ in a bottle.  Something about the raw talent and  emotion just can’t be captured the same way as when you are there, live in the flesh, and can groove with them as they give it all they got. I think the Banditos fall into that category.

Closing out the night, Lucero had a packed house and the lawn area was stuffed to the limits. All I can say is that those Memphis boys know how to have a good time. Paint-spattered jeans, t-shirts, beards, and workboots. Country boy blended with rock and roll attire. They had it all and they came ready to give their fans what they came to see. Ben Nichols’ vocal performance was really very interesting to me. I was looking around to see who was harmonizing with him, and I didn’t see anyone else singing, at least on stage. The crowd knew every word of every song, and, as I listened to them, they were pretty rabid fans. Some of them even said they were almost crying on some of their slower, more serious songs. I am not sure I was moved to tears, but their country alt rock songs I did like a lot. They played their set up until it was time for the fireworks, which are always top notch at the USNWC. 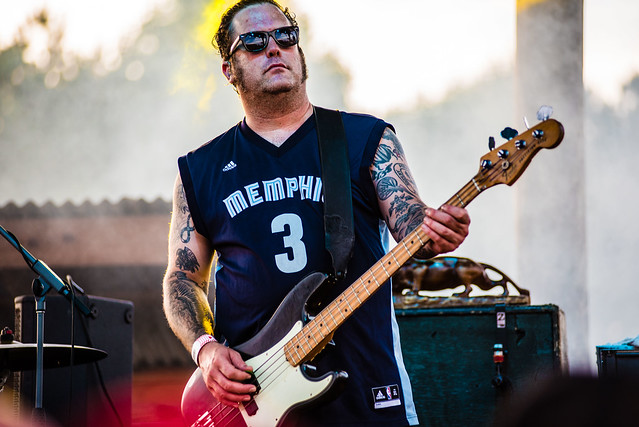 It was a great night of a Southern Rock/Americana showcase of three great bands. Keeping true to their billing of road warriors, all three bands are back out on the road. If you want to see some good classic rock/country/Americana/blues with a twist of punk for good measure, go check out these three bands. You will not be disappointed.