Find out about the smell everyone is talking about and how each performance made up for it. 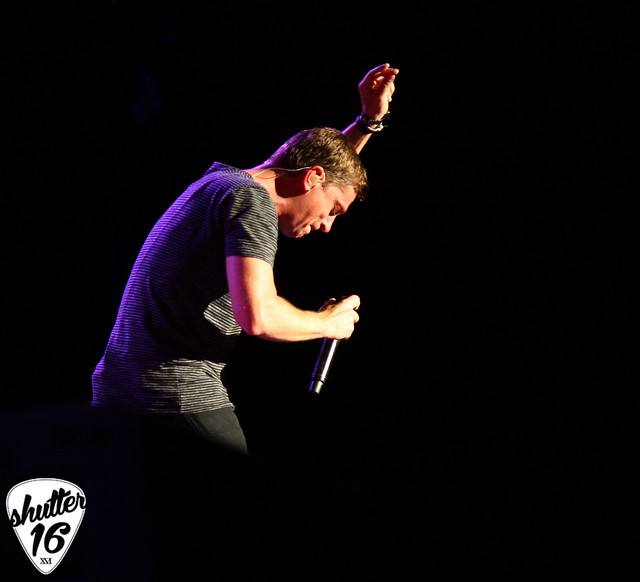 //embedr.flickr.com/assets/client-code.jsRob Thomas of Matchbox Twenty played the Uptown Amphitheatre last night; joining him was Plain White T’s and Vinyl Station. Thomas and Plain White T’s are both touring with new albums, and Vinyl Station is enjoying their first national tour. During this tour, called The Great Unknown (after Thomas’ album), there were a few postponed dates due to Thomas’ wife Mari having health issues (#teammari). In addition, Vinyl Station reached out for help from their fans to fund the tour and received a resounding swell of support. The Plain White T’s had their pitfalls with a rained-out show (they still performed), but everyone’s coming together for a killer line-up. 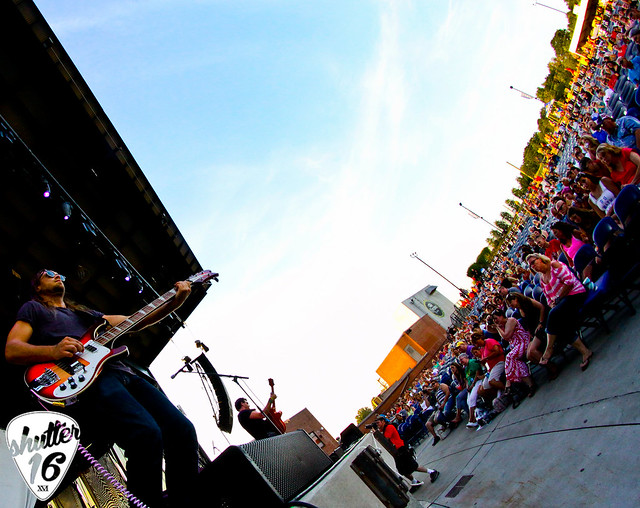 I was unaware of the opening band until the day of the show, so I didn’t have time to look them up and have a listen. 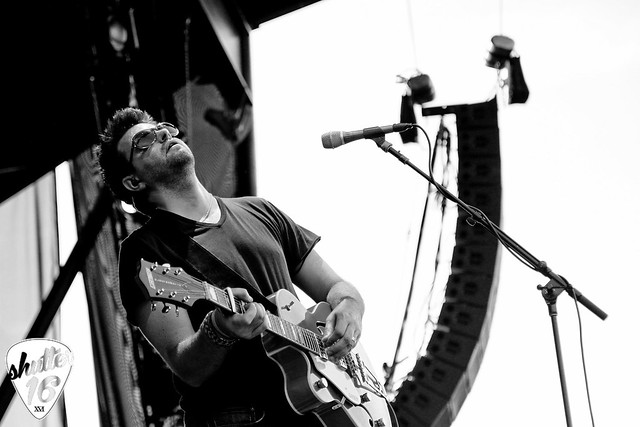 Vinyl Station was probably the biggest surprise of the night. I knew the general genre to expect, but the abilities of this Phoenix band were both technical and personable. 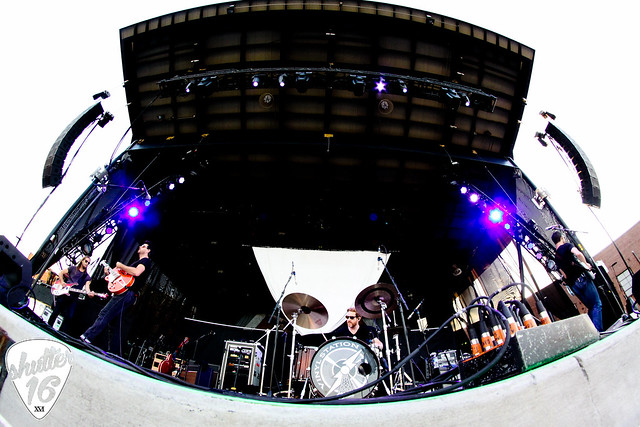 I was pleasantly surprised by the smooth-rocking licks that came from out west, stylistically even. Their full-sounding music was as inviting as it was uplifting. 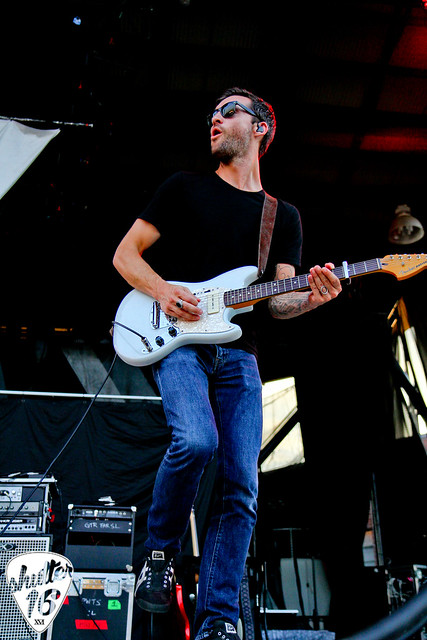 The phrase of the night was “crowd interaction,” because although this was a pretty tame event (everyone remaining at their seats), every band had fun with the crowd in their own way.

#twitfromthepit photo from Molly of Rob Thomas taking a #selfie with fans whilst performing
Vinyl Station played a killer set, and afterward met with fans at the merch table well into Plain White T’s’ performance. This is when the collective gag-reflex of the crowd was tested (not because of Plain White T’s, of course).

#twitfromthepit photo from Molly
About 100 yards from the stage, behind shiny metal gating, some food waste was spilled. This was at the top of a hill that lead down toward the right of the stage. Two people were unfortunate enough to be near the first wave of spillage; a woman’s shoe and a man’s pant-cuff were soaked. This was at the end of the Plain White T’s’ set, during the ever-so-sweet song “Hey there, Delilah.” They suddenly stopped singing, taken aback by the smell. Later, Tom Higgenson asked “could whoever brought the dead horse please pack up and leave?” and finally declared “Charlotte, you are the smelliest crowd!”


(Later, when a bit of the smell wafted over again, Thomas said “It smells like a turd had sex with a garbage can — and farted.”)

Uptown Amphitheatre later tweeted: “unfortunately there was a cooking grease spill on the plaza last night.”

While half of the crowd was singing along to their heart’s content, their mouths and noses were filled with the stench of old grease. At one point I saw someone running from the waste disposal area with their camera on. Maybe they realized how terrible it was and wanted to see if they could capture the horror on the concert-goers’ faces. The venue staff dealt with the situation promptly as well as they could. 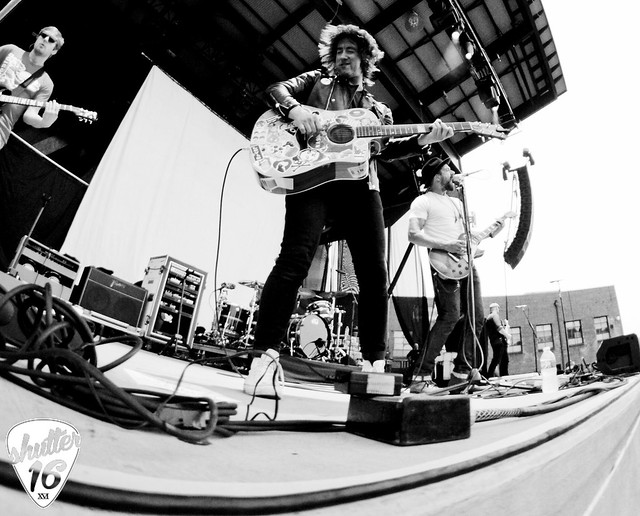 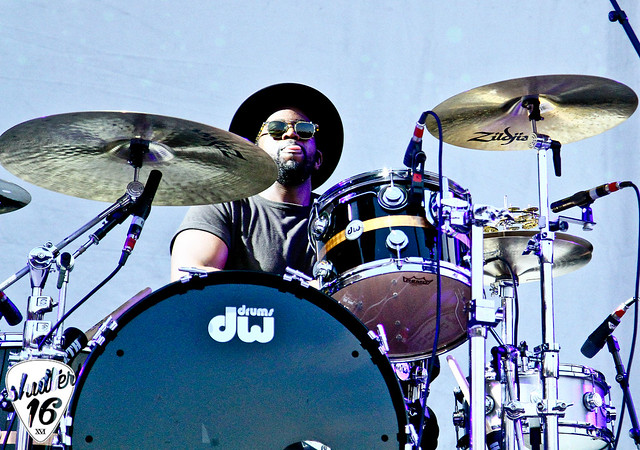 Heard Through The Crowd: -Plain White T’s: “Everyone sing along!” Man in crowd: “We would if it didn’t stink!” -As the Plain White T’s announce a song about divorce (“Giving Tree”) Man in crowd holding a Corona: “Everyone get ready, it’s about to get fucking depressing.” -Woman watching Vinyl Station: ”I need that guitarists number!” 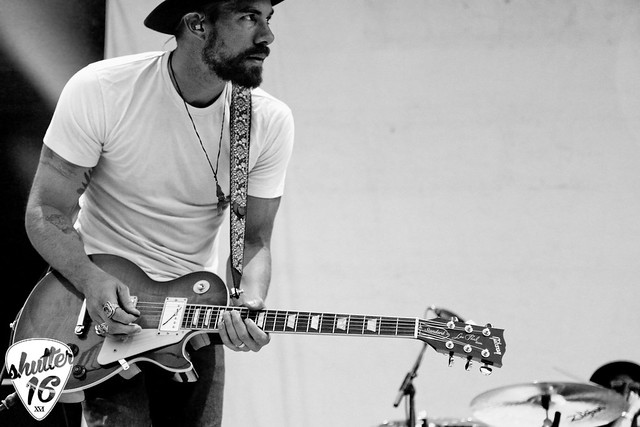 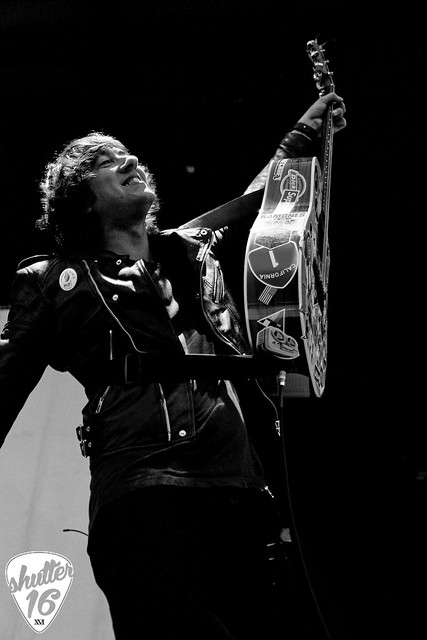 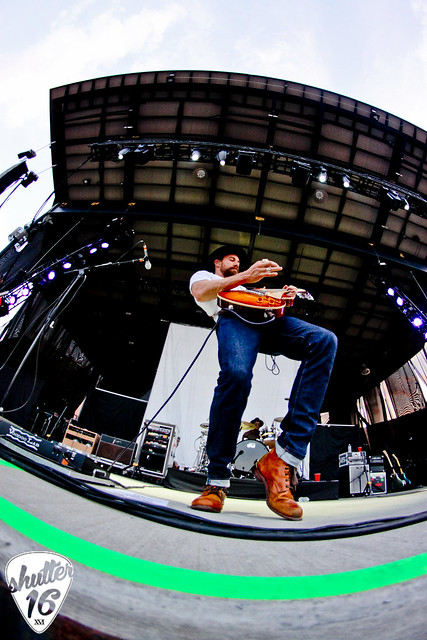 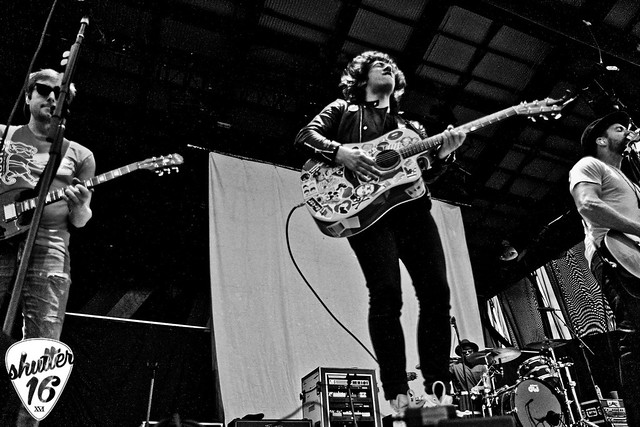 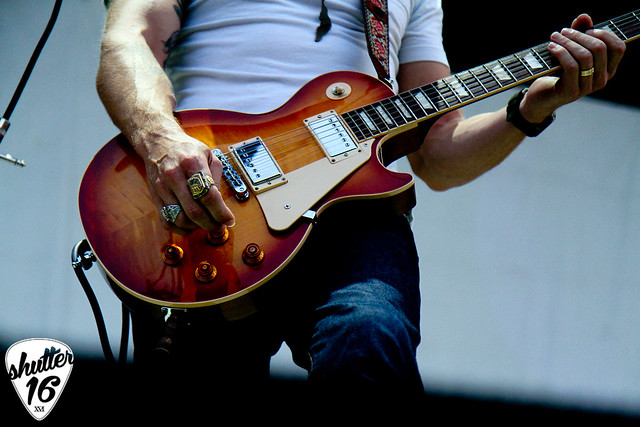 All the while, Plain White T’s played their hearts out, loving on the crowd in such a way that broke down the barrier of performer and audience even more than the ever-unifying stink. 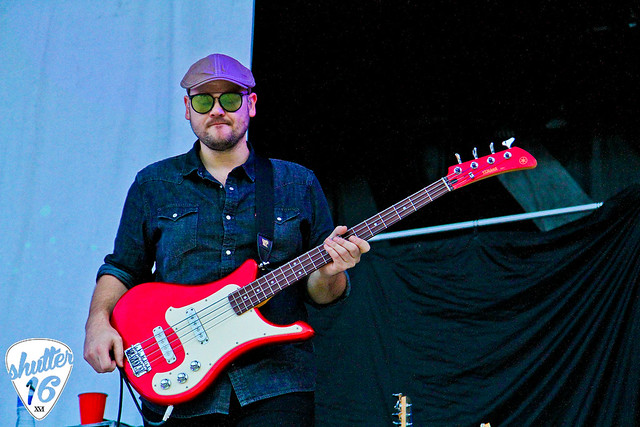 They called out people in the crowd for great hair, great shirts and generally flirted with every one of their fans. At the end of our date with the Plain White T’s, we all blew kisses and hoped they’d come back soon. Overall, I commend this band on having such a wide reach across genres and demographics. 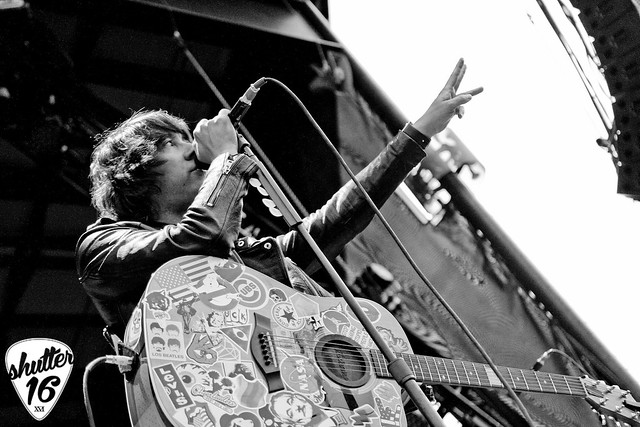 40-year-old men and 10-year-old girls sang along just the same to the T’s. The new album, American Nights, is fun and has a depth that I haven’t seen from the band before. I suggest that you take their top-charting hits with a grain of salt and give this new album a listen. I think that they’re closing in on both style and attitude: classic and suave. They know how to create a hit and they know how to facilitate fun. 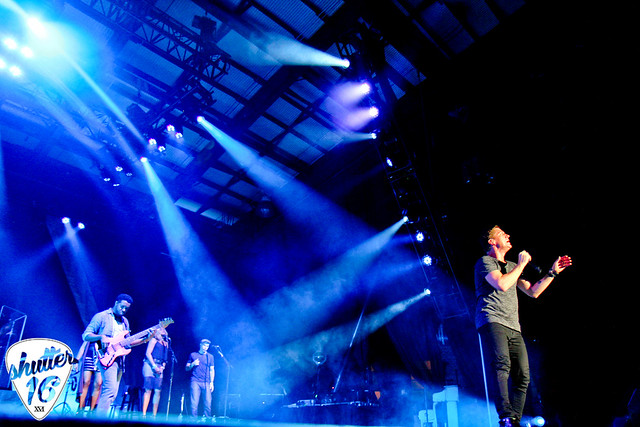 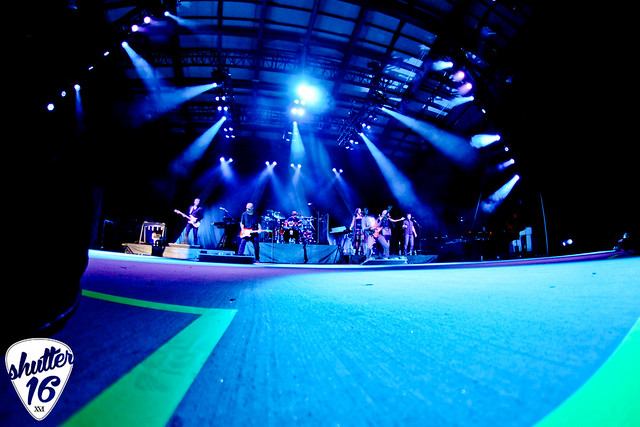 As the smell subsided substantially, the stage setup for Rob Thomas was quickly altered. The reason why became clear when the entire band was out: two guitarists, a drummer, three back-up singers, Rob Thomas and even a guitarist from Vinyl Station joined in off-stage with some riffs. Skipping introductions, Rob Thomas and company dug right into the set with an intensity and passion comparable to a liberal church service. 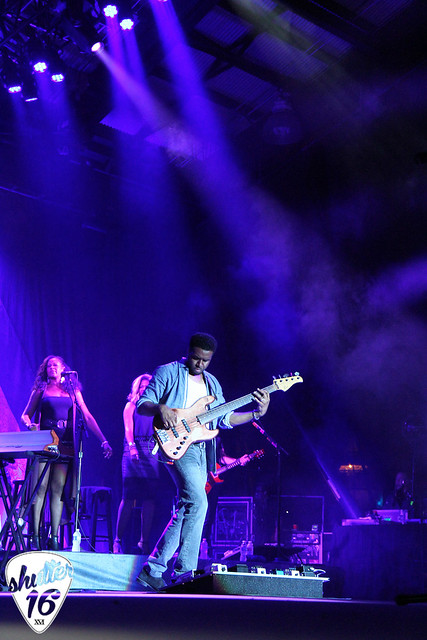 Everyone was compelled to their feet to sing along or dance. Throughout the set, they got funky and (much like other funky groups) spotlighted their numerous members. 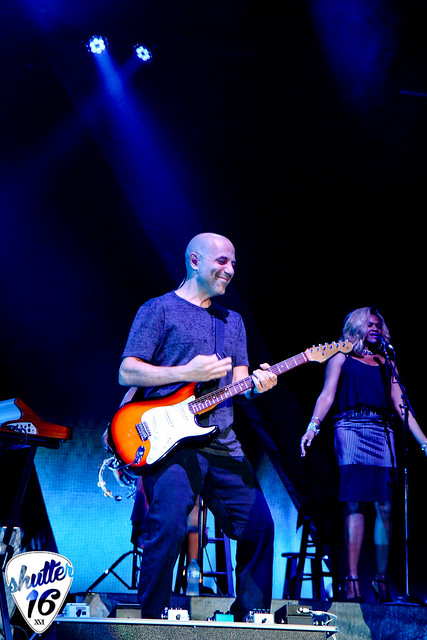 Each of them really brought a personality to the show that I won’t soon forget. The crowd was insatiable, especially one youngster named Erin from the front row. They must have requested a song, because Rob Thomas apologized that they wouldn’t be playing it, but made up for that by bringing them onstage for “Heartbreak,” their final song. 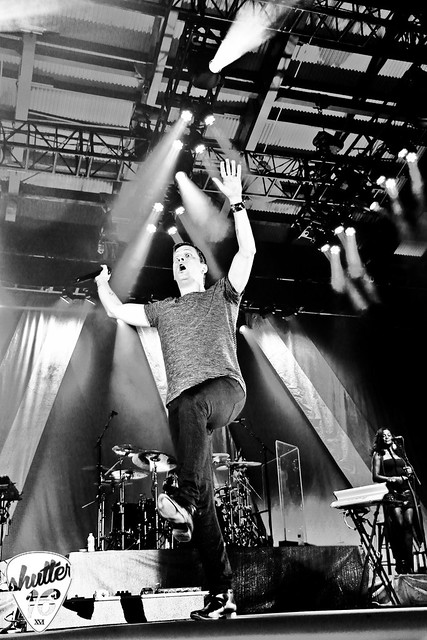 The stand-out performance of the night was the Bowie cover, “Let’s Dance,” where Thomas got offstage and walked through the crowd (to many a lady’s delight). Apparently there’s a sweet-spot that he prefers, located in front and to the right of the sound-booth. 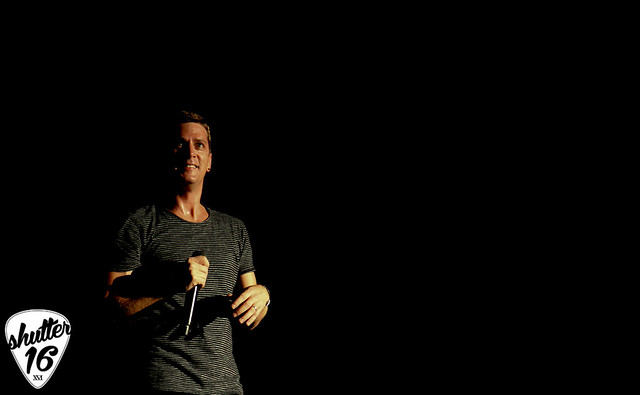 Honestly, he treated the entire venue as a sweet-spot for him. Considering his wife’s health-status, he’s drilling into this tour like a man with a mission, which holds true to his artistic discipline. 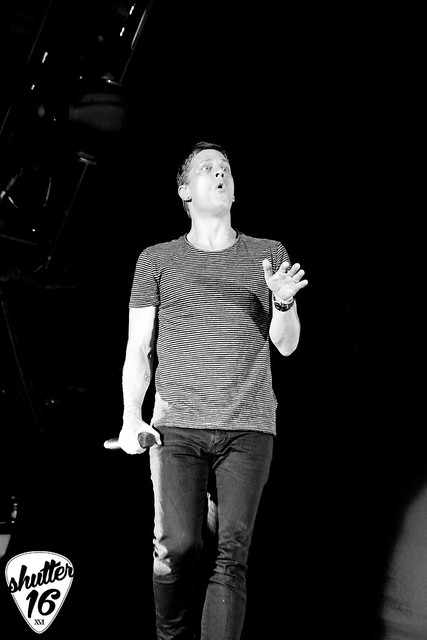 I already cannot wait for his next project, and it’s only been a couple of weeks since his newest release The Great Unknown. Ticket-holders from last night were gifted a free download of the entire album, they just need to redeem it via their ticket stub. Thomas’ ability to be an outstanding performer (as well as attainable, as he referred to himself as ‘uncle Rob’) is what inspires me most. His stage presence, both swagger and humor, is enough to show why people fawn over him. The next time he or any one of his groups comes to town, I’ll be there. 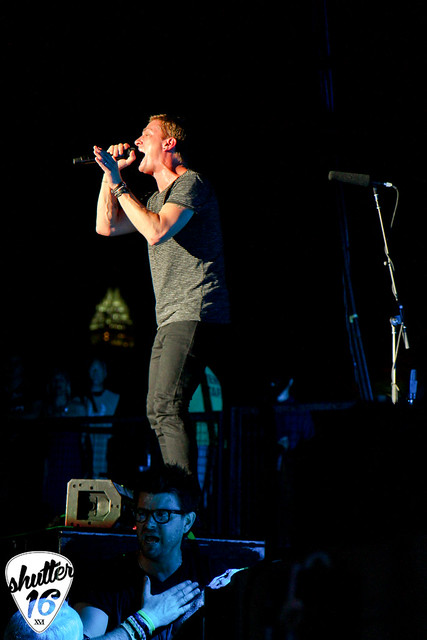 Every element of the show was on point: the bands worked well together, the crowd was on-board, the food was plentiful and the disaster (which every good show has) was memorable and forgivable. I didn’t hear word of anyone requesting refunds and only one person was noted that it “ruined his night,” but there were still plenty of people dancing, singing and drinking jovially during the show. Stink or no stink, this show was my second favorite this summer. 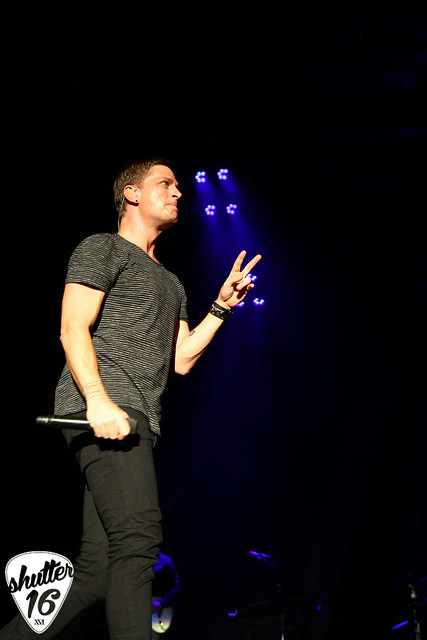 *The next day, WCNC Charlotte’s Glenn Counts contacted me concerning the smell at the event; it seems like this stink sure started a commotion. See the interview here.